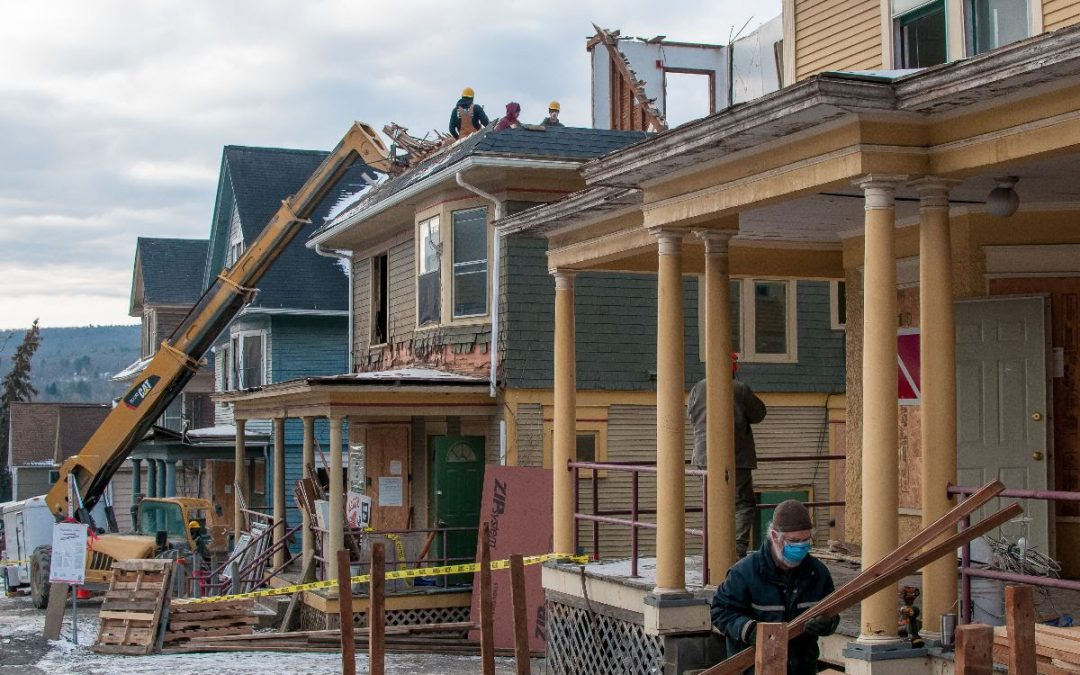 In December and January, a major salvage effort of building materials in 11 large, 100 year old houses in Collegetown that were slated for demolition as part of the Catherine Commons development project was coordinated by a number of community partners, led by Finger Lakes Reuse.

We fully deconstructed one of the large homes on College Ave. (4,500 sq. ft, three stories) was completed thanks to an Engaged Cornell Grant in partnership with Cornell’s Circular Construction Lab, Local Laborers #785 union members, Trade Design Build and the expert guidance of Dave Bennink from ReUse Consulting.

Historic Ithaca/Significant Elements salvaged doors and hardware throughout the 11 houses. Thanks to support from CR0WD (Circularity, Reuse and Zero Waste Development), the Circular Construction Lab, Cornell’s Just Places Lab, and Historic Ithaca – we had an excellent turnout of volunteers to help support the salvage work. Several sets of kitchen cabinets, 20 cast iron radiators, thousands of square feet of oak and fir flooring, and hundreds of linear feet of chestnut molding were harvested from the other 10 houses, thanks to more than 55 volunteers for Finger Lakes ReUse who worked over a 5 week period during generally bitter cold conditions.

The salvaged materials are now at ReUse’s warehouse space thanks to support from a generous private donation, Tompkins County, and the City of Ithaca. There, materials like oak flooring and chestnut molding will be processed (denailed, bundled, and priced), documented for the Engaged Cornell project, and then put up for sale through our ReUse Centers. Those interested in purchasing materials from the salvage and deconstruction project can fill out this form.