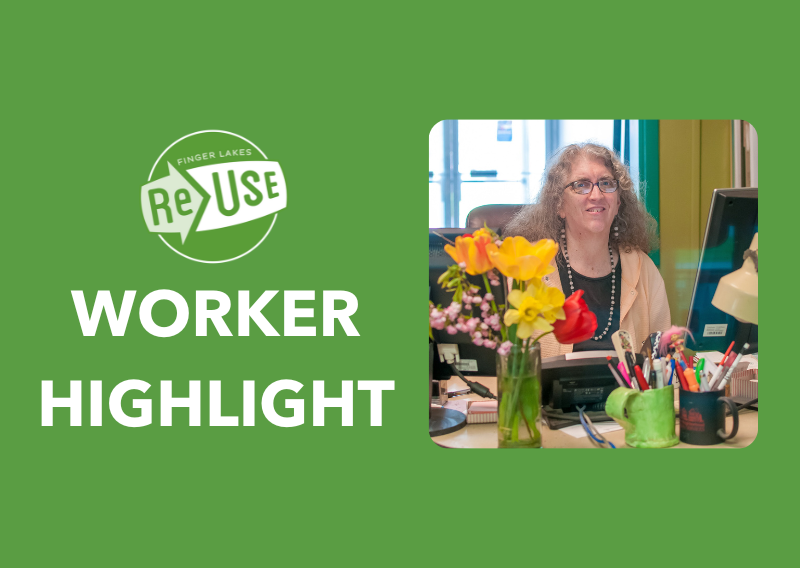 Louise is the administrative manager at Finger Lakes ReUse, and was the first person Executive Director Diane Cohen hired, before ReUse even had stores or an office!

Louise shared that, “We were office guests at Tompkins County Solid Waste for a brief period while Diane and the Board looked for a building. It was hard to find a suitable place to buy so we rented at the Triphammer Mall and opened up for business in November of 2008. So much for temporary accommodations, we’ve been there now for thirteen years.” Louise has seen the ReUse through everything, and remembers that the early days were full of excitement, gaining input from the community, and working hard to get the stores up and running. She even noted that when the first location opened in the Triphammer Mall, the organization had only four employees, not even a cashier!

When asked what she likes about working at Finger Lakes ReUse, Louise said, “I feel that the reuse movement directly aids conservation of the environment, and keeps resources in the community. Everybody feels a connection to the project, and I love all the humans that I get to meet and serve. And there’s a lot of excitement from the constant change and growth.” Relationships, meeting new people, and working with a diverse group of people is at the heart of what is important to Louise at ReUse. Louise has seen the ReUse vision come to light, with the organization now employing over 85 people!

Louise’s favorite ReUse find was an oriental carpet that now centers her living room, but she did note that one lesson she has learned while working at ReUse is that “There’s an awful lot of stuff in the world. I don’t need to own it all.”

Something you may not know about Louise is that she got 26th place in the national spelling bee when she was in high school! In her spare time, Louise enjoys singing jazz, reading mysteries, and playing euchre.

Louise is an extremely integral part of the operations at Finger Lakes ReUse, and we are so grateful for her dedication and hard work. Thanks for sharing your experience Louise!